Generally archeologists divide prehistory in the southeastern United States into four basic periods based on the lifeways and technology of the prehistoric peoples who lived here. They are: Paleoindian, Archaic, Woodland, and Mississippi. 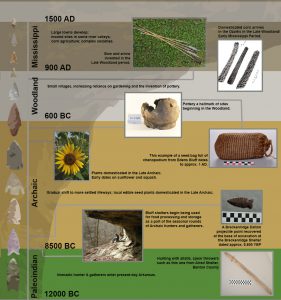 Archeologists use the term “Paleoindian” to refer to the earliest Ice Age hunters in the Americas. A distinctive Paleoindian culture, called the Clovis culture, developed in parts of modern-day Canada, the United States, and Mexico by at least 11,500 BC. Clovis people developed a unique way of life that included hunting mammoths, mastodons, and other large Ice Age mammals. Their way of life persisted for about a thousand years, until the waning centuries of the last Ice Age. To date no Clovis-related artifacts have been recovered from contexts in Arkansas Ozark bluff shelter sites. Warmer climates developing after 11,500 BC brought an end to Ice Age conditions and gave rise to a climate more like what we know today. This environmental change also brought the extinction of mammoths, mastodons, and other large Ice Age mammals. In Arkansas and other parts of the South, Clovis culture developed into the Dalton culture around 8500 BC. Dalton people settled down into regional territories where they hunted deer and other animals and collected a variety of plant foods.

While the Paleoindian period is not well represented in bluff shelters, the Archaic is. The artifacts associated with the Archaic are large spear or dart points used with atlatls to hunt animals like deer, elk, and bison. Archaic peoples produced no pottery until the very late Archaic.

For most of the Archaic period, people lived as hunter-gatherers. Diverse Archaic Indian cultures developed out of the Dalton culture in Arkansas and the South, beginning around 8000 BC. Many communities settled down in river valley camps. Men, women, and children traveled from these camps to fish, hunt animals, and collect wild plant foods. Selective harvest of several plant species led to their domestication beginning around 3000 BC. Gardening became a new food-producing strategy. Bluff shelters were probably one stop on a seasonal round. The plant remains found in the shelters help tell the story of domestication of plants and the transition to gardening in the southeastern United States.

The transition to the next phase—the Woodland period—was a gradual shift toward a more settled lifeway with increased domestication of plants and horticulture. Pottery became widespread in this period and gardening intensified into the beginnings of agriculture. The bow and arrow was adopted late in the Woodland period, meaning that the projectile points are much smaller at the end of the Woodland but overlap with the larger spear or dart points.

Population increases, greater dependence on gardening with the addition of corn (domesticated in Mexico several thousands of years before it entered the Southeast), and the development of fired-clay pottery and the bow and arrow led to settled village life during the Woodland period, from 600 BC to AD 900. New forms of leadership emerged along with ceremonial activities that included the construction of burial mounds to commemorate the deaths of honored community members.

The Mississippi period was characterized by larger settlements and more agriculture. The bow and arrow predominated and the pottery was made with shell tempering.

Large-scale agriculture and continued population growth resulted in the emergence of large, highly organized communities beginning around AD 900. Some towns in the Mississippi Valley had populations in the thousands, led by powerful chiefs. Political and economic ties linked some of these towns together, with the leaders competing for prestige and regional control. Widely shared religious traditions, represented by distinctive artistic motifs on ceremonial artifacts, are found throughout the Southeast.

Bluff shelters continued to be used in the Historic period as well. Like the prehistoric Native Americans before them, Historic Native American, European and African-American settlers made use of the shelters in the nineteenth and early twentieth centuries. Archeologists working in these sites often find evidence of their use as barns, areas for stills, and occasionally even dwellings. Moonshiner Cave in Devil’s Den State Park is one example of a bluff shelter that was converted into a building in the early twentieth century.