The Arkansas Archeological Survey (ARAS) staff respond to several bluff shelter looting incidents every year.  This year, the most extensive was our salvage work at Walker Shelter in Bella Vista.  The Bella Vista Historical Museum contacted the ARAS-UAF Research Station regarding preventing further looting at an impressive shelter along the Bella Vista Back 40 trail system.  This trail had been the target of much looting activity prior to the trail opening in the fall of 2016, and it was the Museum’s hope that we could assist with documenting the damage and helping to deter subsequent looting.

This June, as a side-project of the 2017 University of Arkansas archeological field school, 10 students and several members of the ARAS staff visited Walker Shelter.  We created a detailed site map, documented the looting and conducted salvage excavations along the looted areas.  At least a meter and a half of archeological deposits were documented―including the recovery of a Middle Archaic Calf Creek projectile point.  The looters pits were backfilled and the Museum has plans for further sterile fill and signage at the site…we are also planning a guided hike to the shelter and a lecture about the importance of bluff shelters as an endangered resources in the fall–stay tuned.

Great story about our bluff shelter project in The Joplin Globe this morning…Thanks for the great coverage! 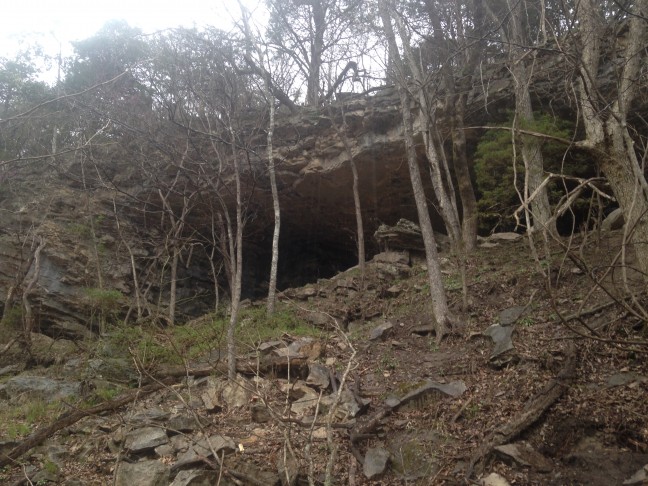 On March 18 & 19 we visited Marshall, Arkansas.  Dr. Brandon gave an evening talk at the Searcy County Historical Society about bluff shelter archeology on Friday night, and the talk was well received with a great turnout.  The following day, Brandon and Rees visited several sites in the area—including Snowball or Slay Cave.

Many archeologists who work in the mid-content are familiar with the distinctive Calf Creek point, a Early and/or Middle Archaic stone projectile point with deep, narrow basal notches.  Those points, and presumably the Archaic culture that produced them were originally defined by Don Dickson in 1968 based on his excavations at “Calf Creek Cave.”

“Calf Creek Cave” is only one of the many names given to what locals call “Snowball Cave”—named after the nearby community of Snowball, Arkansas—or “Slay Cave” named after an early landowner.

In the 1940s there are reports of a “7-foot-tall Indian Woman” being excavated from the cave, but you can check out our discussion of myths and misconceptions about Ozark bluff shelters to see why this is not the case.

Unfortunately for contemporary researchers, this cave—although spectacular—has been extensively disturbed by looting.  Even by 1968, our site records say “forget about Snowball Cave.”  It is very doubtful that intact deposits remain.  This is one more example of important archeological data destroyed by looting.