Visitors to Toltec Mounds Archeological State Park can see how Indigenous people during the Woodland period used the land to grow food at the Plum Bayou Garden. The garden highlights the several thousand year history of plant domestication and gardening and farming among the Indigenous people of Arkansas, and features wild progenitors of ancient Eastern North American crops as well as a smaller selection of key wild plant resources used intensively for both food and technological purposes. 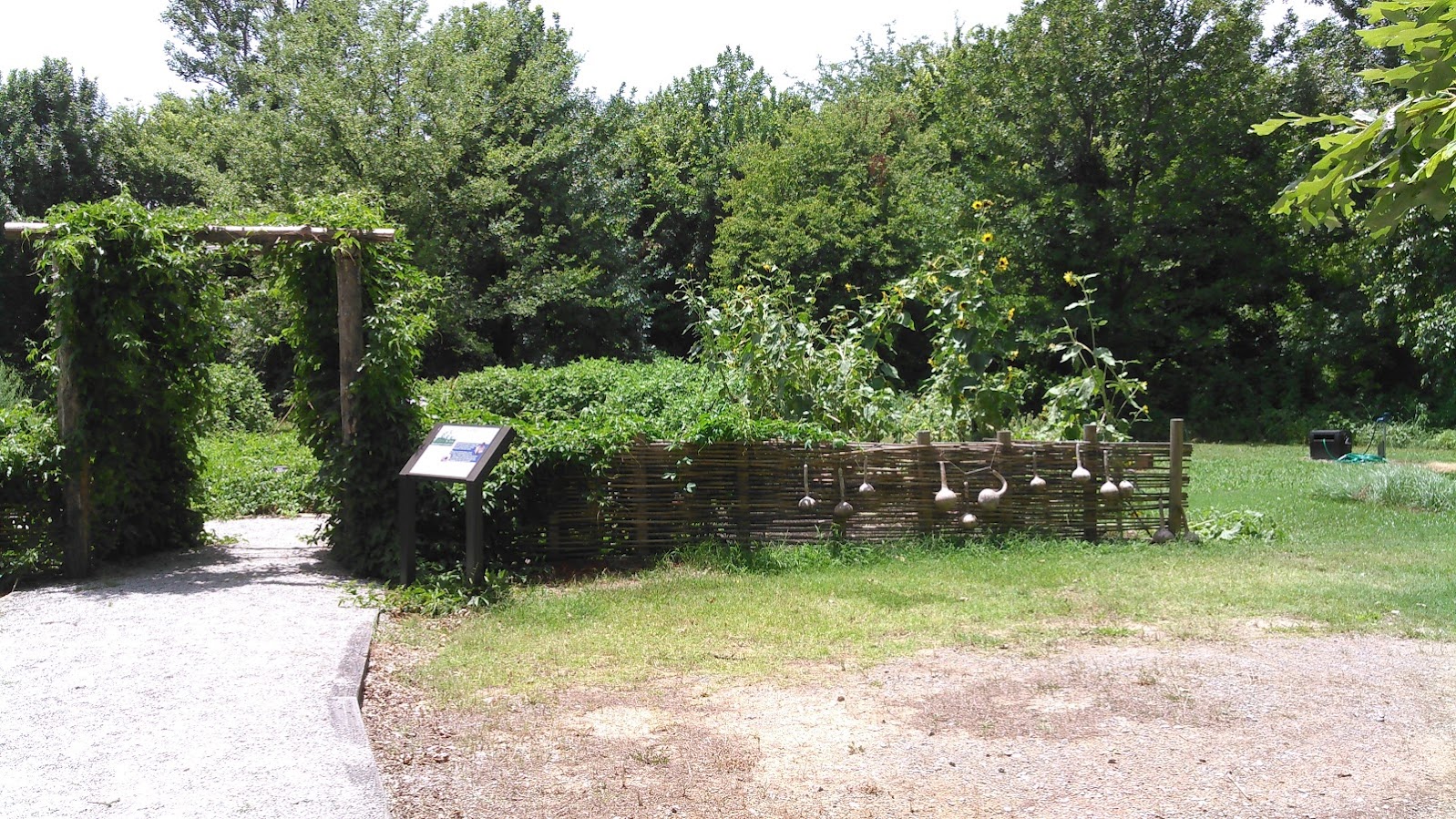 Toltec is the name of a ceremonial center located to the southeast of Little Rock, Arkansas in the region called the Mississippi Delta. The Toltec name for the site dates to the 19th century, when people thought the impressive mounds must have been built by the Toltec Indians of ancient Mexico.  Indigenous people from present day Arkansas created and used Toltec over a thousand years ago (between AD 650 and AD 1050). Today, the site is protected as a state park where you can visit to learn more about the people who built and lived at Toltec.

When the Indigenous people created the site, they built a wall made of soil around three sides of it. The wall was eight to ten feet high and over a mile long. There is a lake on the fourth side of the site. The wall had places where people could go in and out. They also built 18 mounds out of soil. You can see three of the largest mounds at Toltec Mounds Archeological State Park today. The tallest mound is about four stories tall. Modern farming damaged the rest of the smaller mounds. They can no longer be seen, but archeologists know where they were. One mound that you can see today is low with a rounded top. This was a new kind of cemetery. Another one of the mounds that still stands looks like a flat-topped pyramid. This mound had a building on top of it. The Indigenous people built the mounds around a flat, open area called a plaza. They used the plaza for group activities like feasts, dances, and religious ceremonies.

Even though Toltec is a large site with many mounds, archeologists have found that few people lived there. Rather than living at Toltec, the creators of these earthen monuments visited this ceremonial center for big yearly or seasonal events for everyone living in the area. It was the gathering place for people from nearby villages to come together for celebrations. People held large feasts at Toltec. Archeologists know this because they have found areas of the site with a large amount of animal bones and decorated pottery. Archeologists think that many people brought food in their finest decorated pottery and prepared deer and other animals for a large meal. The large number of animal bones suggest that people came from all around to be a part of the feasts.

Pollinators at the Plum Bayou Garden

The Plum Bayou Garden is chock full of pollinators. While the Plum Bayou Garden was planted to allow visitors to see what a garden would have looked like over 1,000 years ago, it has an added benefit of being a center for pollinators by providing plants that are suitable for butterflies, caterpillars, and much more. If it wasn’t for pollinators, we would begin to lose our food sources throughout the world. According to the USDA National Resources Conservation Services Insects and Pollinators website “one out of every three bites of food we eat exist because of animal pollinators like bees, butterflies and moths, birds, bats, and beetles and other insects.”

At the Plum Bayou Garden, the bees and butterflies do not have to worry about pesticides, as no chemicals are used in the garden; instead, everything is done by hand. We also have made it even more hospitable for these pollinators by installing a bee house on the arbor when you first come in. The bee house provides a place for native female bees to lay her eggs. Certain garden plants also help attract certain powerful pollinators. For example, Milkweed attracts Monarch caterpillars and butterflies, while Maypops attract Gulf Fritillary caterpillars and butterflies. 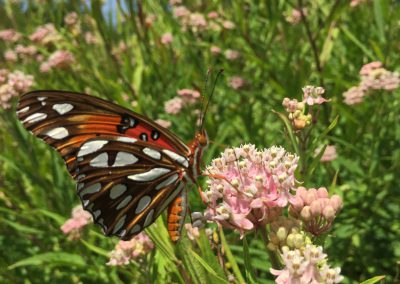 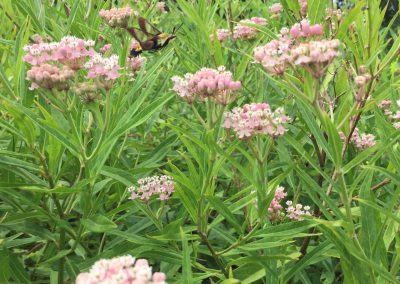 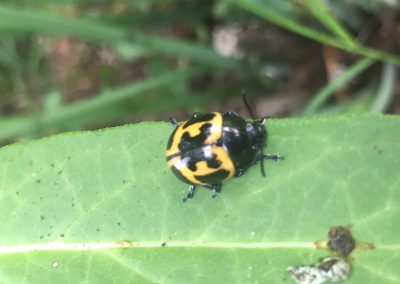 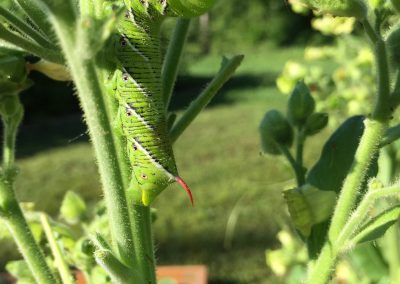 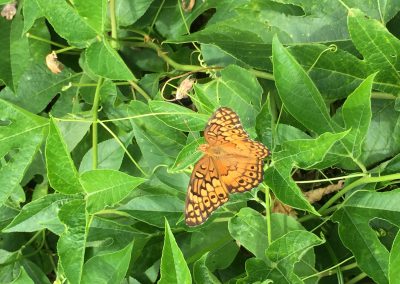 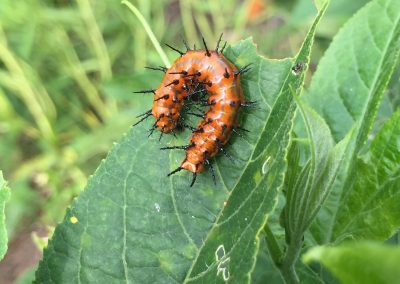 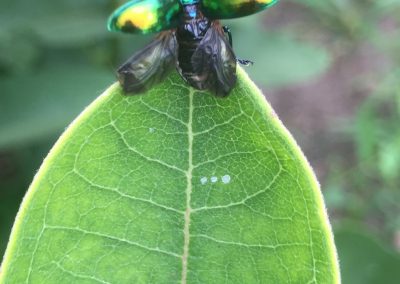 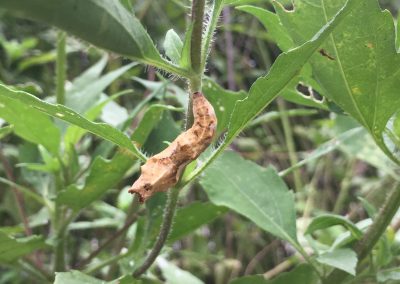 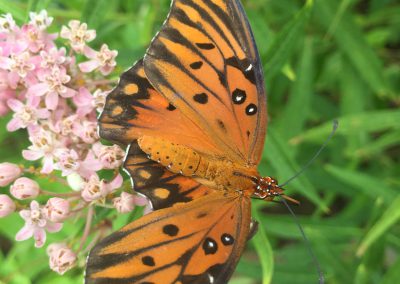 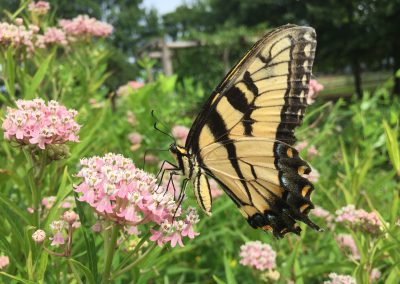 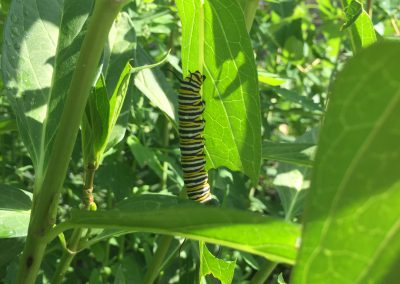 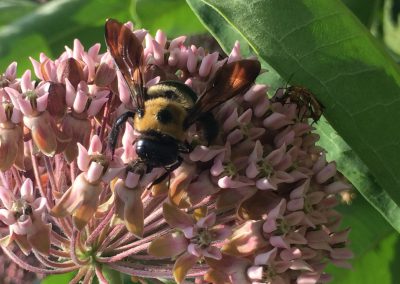 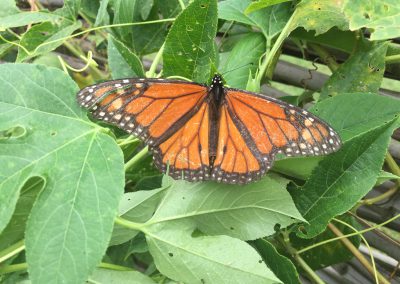