This lesson defines foodways and examines the cultural, nutritional, and economic practices related to what early foragers, or hunter gatherers, produced and ate in the southeastern United States between 9,000-650 BC during the Archaic Period. It focuses on Rockhouse Cave in Petit Jean State Park. Archeological sites in the Arkansas’s Ozarks, like Rockhouse Cave, contain well preserved plant remains that hold evidence of the foodways of Archaic Indians and later Indians. Students learn about the antiquity of the foods they eat. 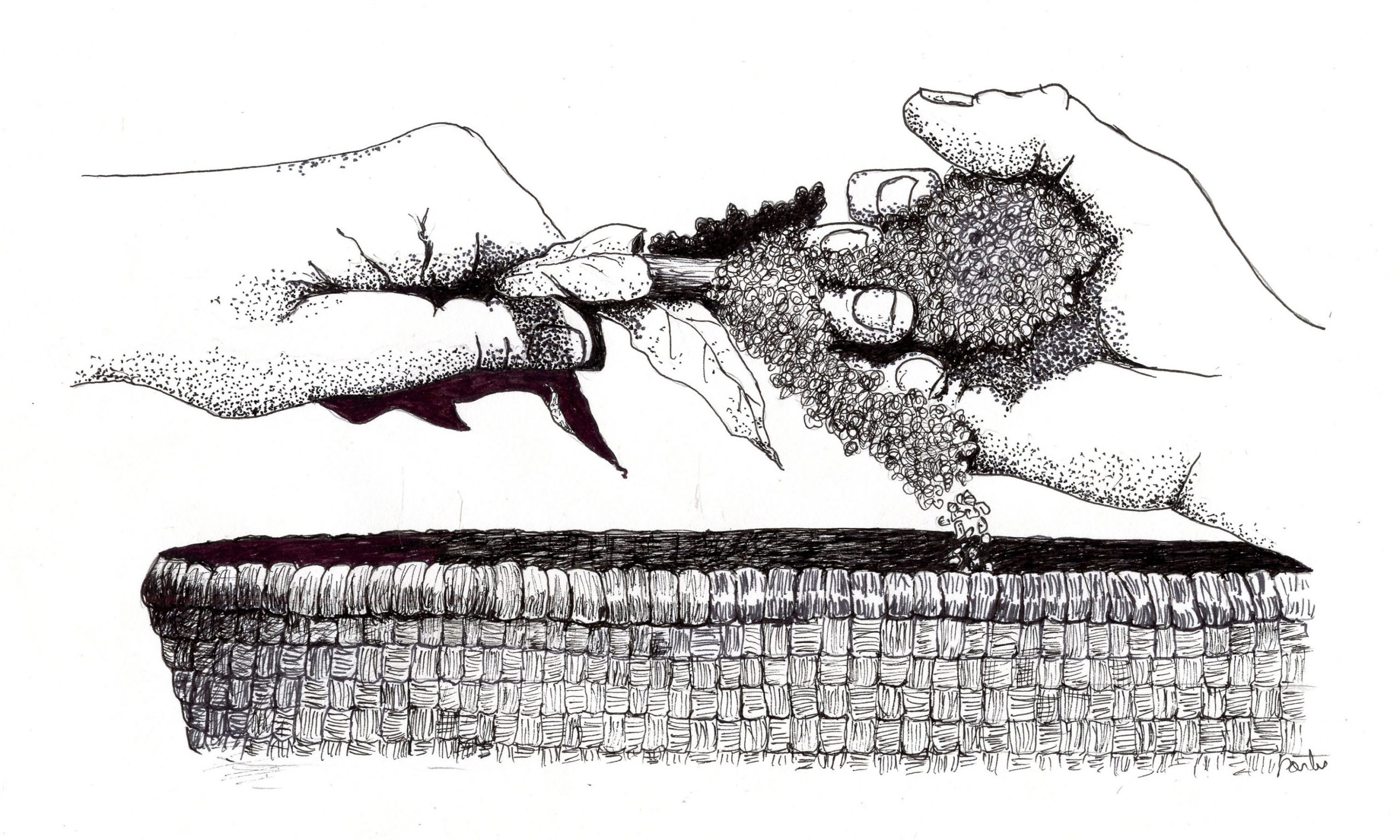 All humans need the same things to survive — food, water, shelter, and companionship. The ways Native Americans met these basic needs changed over time. How did they build their shelters? How did they cover their bodies to protect themselves from cold, rain, and the burning sun? What did they eat and how did they get their food? By answering these questions, archeologists can learn a lot about
how people lived and what was important to them. Also, by looking at the different ways that people meet basic human needs in different environments, archeologists are able to see cultural difference and change over time.

Technology, environment, available animals and plants, cultural preferences, and historical events shape what people eat. The environment and the climate influence the availability of plants that people can use for food. The type of technology available influences the ways meals are prepared (ovens or fire hearths, for example) and the tools used to eat foods (forks or chopsticks). What people eat also depends on the occasion and setting of the meal. Is the meal an everyday lunch or is it part of a celebration or holiday, like Thanksgiving?

Archeologists refer to the nutritional, cultural, and economic practices related to how people produce and eat food, as foodways. Foodways are about nutrition. The nutrients in food help people grow, play hard, and stay healthy. Deer meat and sunflower seeds have different amounts of vitamins, minerals, fiber, and protein. Eating a variety of foods not only keeps meals interesting, but also helps the body get the nutrients it needs to be healthy. Foodways are also a part of people’s culture, or the shared customs, beliefs, laws, and ways of living among a group of people. Everyone needs food, but everyone has a different idea of what food should look like and how it should taste. A study of food is also a study in economics, because whether people are gathering food as prehistoric foragers or participating in an agricultural economy, to understand foodways it is necessary to know how people use natural resources, what kind of labor is required, and how resources are shared between groups. One of the central tenets of economics is that people want certain things and will change their behavior to get those things.

Native Americans did not have incentives like buy one get one free hamburgers, but population increase and the desire to be sedentary were incentives for people to change their foodways over time. Archeologists who study ancient plant remains, like burned seeds, help recreate the foodways of people in the past.

During the Ice Age, people living in the southeastern United States were nomadic, or constantly on the move, hunting large megafauna like mastodon and mammoth. When the Ice Age ended and these animals became extinct, people had to change their methods for getting food, which in turn affected their overall way of life. After the Ice Age, between 9500 and 650 BC (the time period archeologists call the Archaic Period), people still moved around but not as much as before. Many Archaic Indian communities were nomadic, living in base camps and moving from place to place on a seasonal round of hunting and collecting many kinds of plant foods. These people traveled a regional circuit, visiting places that provided ready access to food and raw materials. This guaranteed a variety of meat, fish, nuts, and wild plant foods in their diets. Bluff shelters, like Rockhouse Cave, were used seasonally for short periods of time by small foraging parties or bands who lived at other kinds of sites during different times of the year.

For each student: “Rockhouse Cave, 8000-1200 BC: A Case Study” with the “Nut Butter: A Gathering Recipe”; “Foraging Foodways in the Arkansas Ozarks” worksheet; and “Archaic Period Timeline”.

For each group: “Seasonal Foodways: Plant and Animal Foods” worksheet.

For the class: Scissors and glue.

For the teacher: “Excavation Unit B”, “Foraging Foodways in Arkansas Ozark: Answer Key“, and a map of Arkansas showing water bodies, mountain ranges, and physiographic regions to project; and a copy of the “Archaic Period Timeline: Evidence-based Answer Key”.

Band: A small group of related people, who are primarily organized through family bonds. The foodways of most bands around the world are based on foraging.

Cultural period: A length of time when people shared similar cultures and ways of life.

Culture: The customs, beliefs, laws, ways of living, and all other results of human work and thought that people of the same society share.

Egalitarian: A form of community organization where all people are equal.

Foodways: The nutritional, cultural, and economic practices related to how people produce and eat food.

Foragers: People whose foodways are based on making a living by hunting, fishing, and gathering wild plants.

Nomadic: Movement throughout the year to obtain animal and plant foods and rock for tools.

1. Ask students: Where do you get your food? Where does the grocery store or the restaurant get the food?

2. Follow up this discussion by asking: Do you gather food from any wild plants (berries, fruits, nuts, etc.)? Do you hunt or fish? Could you live by hunting and gathering alone?

3. Tell students, 5,000 years ago, southeastern Native Americans were foragers who got their food by hunting and gathering.

1. Ask students: What is the purpose of food? (It provides nutrition; it is a basic human need.)

2. Pair students up and have them discuss why people eat different types of food or prepare foods differently? Prompt students with the questions below to show how culture, history, environment, technology, and intended use (function) influence food choices.  What do you like to eat? What is a “typical” meal? (culture) What edible plants grow near you? What is the climate like? (environment)  How do you prepare meals? What kind of equipment is used to prepare foods (ovens for baking or fire hearths for BBQ)? What kinds of tools do you use to eat (forks or chopsticks)? (technology)  Do you eat different foods for different occasions? Do you eat the same thing for lunch or as a holiday meal, like Thanksgiving? (function)

3. Project “Excavation Unit B” from Lesson One. Ask students: What do the artifacts and their context tell us about the foodways of the people who lived at this site? (They are hunting wild animal with spears and butchering the animals to eat. The protein and fat from the animal meat provide energy and keep them healthy. They make a living as hunters.)

4. Tell students that Dr. Boxwood could tell that the people who made the site were hunting and butchering their food by the animal bones, spear point, and the scraper used to prepare the animal hide. There is no fire, so she knows they were not eating the meat there. The artifacts provide clues to people’s foodways.

2. Explain to students that during the Archaic Period, people hunted and gathered to get their food. They were foragers. The ways they got their food, the sites they lived in, the tools they used, and the communities they lived in (egalitarian bands) were a part of their culture and their foodways.

2. Have students read the text and answer the questions.

3. Review the answers as a class. Ask the students: What are some of the benefits and challenges of foraging? (scarcity of food in the winter; loss of stockpiled food) What would it be like to live in the winter with limited food options?

4. Ask students: Why are Arkansas bluff shelters important archeologically? (Archeologists often find the remains of plants that document the domestication of plants).

1. Pass out the “Archaic Period Timeline.” Have students complete the sheet by using information from the “Rockhouse Cave, 8000 – 1200 BC: A Case Study” to identify the key dates of occupation, the artifacts, foodways, and social organization. This assignment could be completed as a class, as a group, or as individual homework/assessment.

2. Review the Archaic Period. It is a long time period in southeastern Indian history when people lived in bands, hunted and fished, and gathered wild plants for their food. They use spears and spear throwers to hunt and grinding stones to turn nuts into meal. Use the “Archaic Period Timeline: Evidence-based Answer Key” as a guide for discussion.

3. Review “Curation Shelf ” questions and make sure all the questions were addressed.

4. Tell students about the Nut Butter recipe (with the Rockhouse Cave case study) they can try making at home.

4. Ask students: What questions do you have? Record questions in the “Curation Shelf ” and check them off as they are answered.