Lesson One: Archeology is About People

Archeology is the study of the human past through the objects that people made and left behind. This lesson provides the foundation for the exploration of Native American foodways. Students learn how to define archeology and dispel popular misconceptions about it. They also gain an understanding of the importance of context and chronology in archeology. 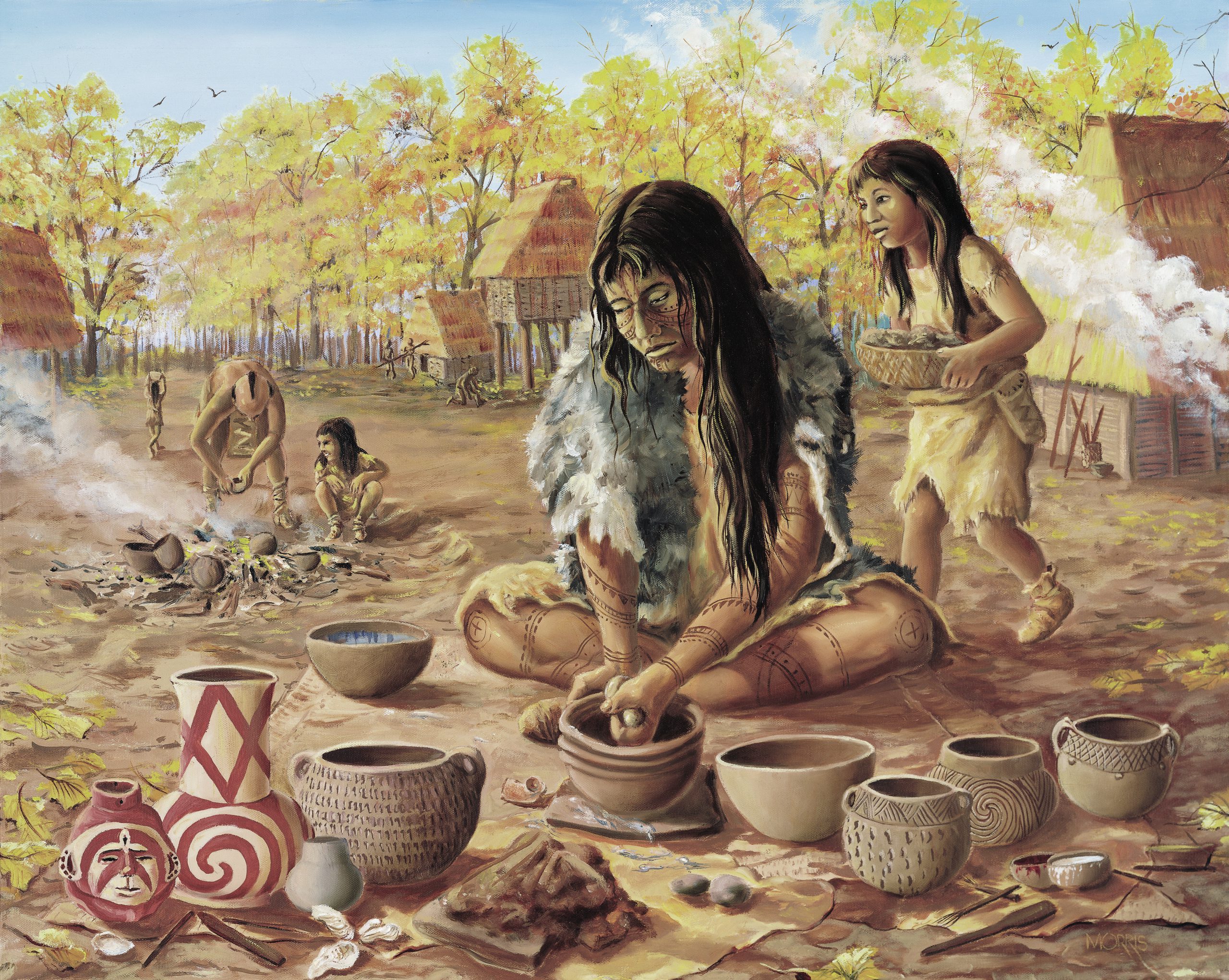 Archeology is a social science that employs the methods of science. Archeologists study the human past by looking at the objects that people made, lost, discarded, or left behind. They employ the scientific method, or systematic observation, measurement, and experiment, along with the formulation, testing, and modification of hypotheses. Archeologists use physical tools, like trowels, measuring tapes, line
levels, microscopes, and GPS units. They also use conceptual tools, like observation and inference, context, stratigraphy, and chronology to understand culture and deep time. This lesson introduces students to archeology and some of the conceptual tools that archeologists use.

Archeologists do not study dinosaurs. People often confuse archeology with paleontology because archeologists employ some of the same methods and concepts used by paleontologists. But paleontology is the study of prehistoric plant and animal fossils, including dinosaurs. Archeologists study animal remains, but only when they are related to human activity. Dinosaurs died out 65 million years ago, so humans and dinosaurs only coexist in the movies (Brief Timeline of Life on Earth).

Popular movies like “Indiana Jones” and “Lara Croft Tomb Raider” depict archeology as destruction, adventure, and the discovery of rare objects. Cartoons, like Calvin and Hobbes, depict archeology as mind-numbing, tedious excavation. It is true archeologists do often travel to exotic locations, but they also conduct research closer to home. They sometimes find one-of-a-kind artifacts, but more frequently they find people’s broken things or the trash people discarded long ago. It is a careful science. An archeologist is like a detective who employs the methods of science to piece together a puzzle. Archeologists document their findings systematically, because archeology is destructive and once the artifacts are dug up that information is gone. Archeologists develop and test hypotheses, record their observations, and take careful measurements to learn what life was like in the past.

People did not begin writing until 5,000 years ago, so archeology is one of the few ways to learn about people who left no written records. In North America, this is 97 percent of human occupation and for the rest of the world the percentage is even higher. This makes archeology particularly important for learning about the history of Arkansas prior to 1541 when the first Europeans (with writing) traveled to the state.

Chronology and context are two important conceptual tools archeologists use. When trying to understand the past the proper sequence of events must be known. Chronology is a tool we use everyday. When someone tells a story or when we watch a news report, the story is told in the order that it happened. Archeologists, like historians, are especially interested in understanding the order in which things happened in the past. When did people first occupy a site or region? When did they leave? When did the bow and arrow replace the spear? When did Indians begin to make and use pottery? When did they domesticate their first plant foods? When did Arkansas Indians start growing plants, like corn, that were domesticated in other regions? When events like these are arranged in order of occurrence, an archeologist has established the chronology. A timeline is used to display events visually in chronological order. Archeologists have established a timeline of Native American history. It is divided into five cultural periods that are based on similarities in the way people lived over time (see p. 15). Through this curriculum, students will explore and recreate this timeline.

The second concept is context. For archeologists, context is similar to “context clues” in language arts. By paying attention to the clues in a sentence, a reader can figure out the meaning of an unfamiliar term. Similarly, archeologists learn about artifacts and sites, by carefully documenting the clues nearby. The things a person owns provide clues about the owner. If an archeologist looked inside a student’s bedroom, the things in the room could provide clues to that person’s age, gender, and interests. For example, a baseball bat and a football jersey in someone’s bedroom suggest that the owner likes sports. Paints, colored pencils, and an easel could mean that the person is an artist. The artifacts tell a story if they are found together, where their owners left them (in context). Archeologists rely on the artifacts and where people left them (context) to learn about the past.

Archeologists preserve the context of artifacts they recover from sites by recording the location of everything they find. The artifact and its context provide more information to the archeologist than the artifact alone. When context is lost, information is lost. In this lesson, the tape measure activity helps students understand deep time and the “Context Is Everything” worksheet demonstrates that removing artifacts from a site removes them from their context and makes it very difficult to get a complete understanding of what people did in the past.

For each student: A copy of “Context Is Everything” worksheet; three copies of the “Key Terms”; a pocket folder to store unit materials.

For the teacher: Index cards; a 20-foot tape measure; paper clips or clothespins; “A Brief Timeline of Life on Earth”  and a  spear point image to project and a copy of the “A Spear Point” scenario; a copy of “Telling Time with Telephones”; chart paper or board space for the student’s “Curation Shelf ” questions.

Archeologists name time periods in Native American history, based on changes in American Indians’ cultures. Cultures differ based on the environment, the type of foods people ate, the tools they used, the sites they lived in, and what their communities looked like. By studying American Indian’s ways of life and how they changed over time, archeologists identify cultural periods, or lengths of time when people share similar ways of life. In the southeastern United States, there are five broad time periods.

Paleoindian Period (11,500 – 8500 BC): This is when Indians first arrived in Arkansas, at the end of the last
Ice Age. They hunted large animals including mammoths and mastodons using atlatls, or spearthrowers, but
gathered only a little plant food.

Archaic Period (8500 – 600 BC): Archaic Indians hunted, fished, and gathered many wild plants. They
camped in a different place every year.

Woodland Period: (600 BC – AD 900): Woodland Indians lived in small villages all year long. They grew
garden crops during the summer. They made and used pottery. They hunted with the bow and arrow instead of
a spear thrower and collected nuts and berries.

Mississippi Period: (900 – 1600 AD): Mississippian Indians lived in large towns. They grew corn, beans,
and squash in large fields. They hunted and fished, and collected a little wild plant food.
Age of Discovery (1500 – 1700 AD): The era of European discovery and exploration of North American,
when Native Americans and Europeans first met

In Lessons 2 through 5, students will complete a timeline for each of these periods and the important changes
that take place.

1. Pair students up. Tell students: List all of the ideas and images that come to mind when you hear the word archeology. What images do you see when you picture an archeologist?

2. Have students report back and write the ideas and terms on the board.

3. Underscore that archeologists do not study dinosaurs or other fossils. Use the background information to discuss the differences between archeologists and paleontologists. Help the students pick out the concepts that refer to archeology.

4. Share the “A Brief Timeline of Life on Earth” to illustrate that dinosaurs and humans did not exist at the same time. Before continuing ensure that students understand that archeologists study people who lived in the past.

1. Project “A Brief Timeline of Life on Earth.” Tell students that the timeline represents billions of years. Explain that for most of those years, there are no written records.

3. Tell students: To be able to study the deep past, archeologists create timelines to see how people’s ways of life change over time. Use a tape measure to help students assess time in visual increments. Extend a tape measure to its full extent across the front of the classroom
and lock it open. Let each two foot increment equal one year and each two inch segment will equal one month. Write the scale on the board: 2 feet = 1 year; two inches = one month. Add a card with the start year (2011, for example) and the end year (2021) to the tape.

4.Write a month and a year (between 2011 and 2021) on 6-8 index cards. Ask groups of two students to select one of the index cards. Have the students come forth and locate their year/month on the tape measure.

5. As each group comes forth to clip their card to the tape measure, ask them: How old were you on this date? Could you read and write?
What was your favorite food?

6. Once all of the index cards have been placed, show students the four telephones. Ask them, Which of these phones have you used or seen? Tell students that telephones are artifacts of our current time. Have the students put the telephone on the tape measure. For the rotary dial phone, have students envision where it would go on the timeline if time extended around the room in ten year intervals.

1. Explain to students that by identifying when things were made, archeologists can construct a timeline of past events that can be used to understand the lives of past people. Just like we can see the changes in phone technology overtime, by studying sites and artifacts archeologists can see change over time long ago.
2. Tell students: We are going to use archeology to learn about Native American history, so that we can better understand how people lived in the past. We will study, as archeologists do.
3. Introduce students to the “Key Terms” log. Distribute three copies to each student and assist them with defining archeology, artifact, chronology, and timeline.

Divide the class into groups. Pass out the “Context Is Everything” worksheet and have the students look at the excavation units and answer the questions.

2. Review the answers and explain that the context – the site’s cultural, georgraphical, and environmental relationships as well as the locational position of the artifacts help archeologist piece together Native American history prior to writing. Use the “Context is Everything” Answer Key to help answer any questions.

3. Have students get out their Key Terms log and help students define archeological site, excavation, and context.

1. Project “A Spear Point” image. Read the brief scenario. Have pairs of students discuss what Dr. Boxwood can learn about the spear point.

2. Have the students report back. Ask them how Dr. Boxwood would know? Review what Dr. Boxwood could know (the type, a relative age, the kind of material). Underscore that she may be able to know how old the point is (and put it into the timeline of Native American history), but without the context she can learn little about the people who made and used it.

3. Explain that archeologists carefully document the context of the artifacts they excavate in order to learn not only how old an artifact is (chronology), but also how people used it.

4. Ask students: What questions do you have? Record questions in the “Curation Shelf ” and check them off as they are answered.